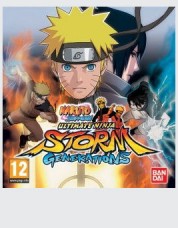 While carrying several elements previously seen in the prequels, such as playing the story mode and online tournaments, the game sees several new features and changes. The battle system has been modified for faster gameplay. The game now implements a new status meter that limits the amount of techniques required to avoid the opponent's moves. One of the new additions to the game is the "Beast Mode", also known as "Awakening Mode", in which a character transforms into a beast with stronger attacks should they be about to be defeated. For example, Part II Naruto Uzumaki changes into his four Tailed Beast Chakra Mode that enhances his abilities, while Part II Sasuke Uchiha summons Susanoo, a massive ethereal warrior that aids him in combat. Players are also able to use real collectible cards to unlock new content and gain advantages in the fights.

The story mode covers both Part I and Part II from the series, respectively featuring the younger and older incarnations from the series' characters. The role-playing game elements from Naruto Shippuden: Ultimate Ninja Storm 2's story mode were removed in favor of consecutive battles, thus reducing the time spent during the mode. Although it mainly focuses on Naruto Uzumaki's adventures based on the series, it features new sidestories lead by other supporting characters that expand their backgrounds. New animated cutscenes are used for the story mode. Promoting 72 playable characters and 15 support characters, the game includes the debut of the new Kage, the strongest ninjas from the Naruto series, introduced in Part II, as well as Kakashi Hatake's team during his childhood. Assistant character are exclusively teaming up with playable characters such as Fu and Torune who are teamed up with Danzo Shimura.