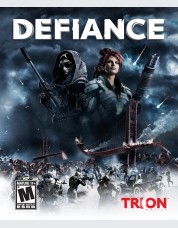 Defiance is a science-fiction-themed Persistent world MMO third-person shooter from Trion Worlds. Defiance takes place on a terraformed Earth several decades into the future. It is a tie in to the Syfy show of the same name. The game is set to be released April 2013 for Microsoft Windows, Xbox 360 and PlayStation 3. It will also come out on Steam.

The game takes place in the San Francisco Bay Area after a massive world-wide terraforming event led to the alteration of the landscape, the fall of plants and animal species and the rise to new species. Several alien species came to Earth to set up a new home, which led to war, further devastating the planet. After the war, both Humans and the aliens, known as Votans, learned to live side by side. Players are enlisted as "Ark Hunters" by Karl Von Bach (CEO of Von Bach Industries) to travel to the Bay Area in search of advanced and expensive alien technology. Players also take part in side missions to earn some cash or challenges where they compete with other Ark Hunters.