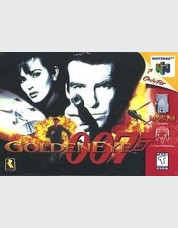 GoldenEye 007 is a first-person shooter video game developed by Rare and based on the 1995 James Bond film GoldenEye. It was published by Nintendo and was exclusively released for the Nintendo 64 video game console in August 1997. The game features a single player campaign in which players assume the role of British Secret Intelligence Service agent James Bond as he fights to prevent a criminal syndicate from using a satellite weapon to cause a global financial meltdown, and a split-screen multiplayer mode for up to four players.

GoldenEye 007 was developed over two and a half years by an inexperienced development team and was originally intended to be an on-rails shooter inspired by Sega's Virtua Cop, before being redesigned as a free-roaming shooter. As one of the first first-person shooters for a home console, GoldenEye 007 established a new archetype and introduced several innovations to the genre, including a zoomable sniper rifle, stealth elements, and a multiplayer deathmatch mode on a console.

GoldenEye 007 was a critical and commercial success. It received overwhelmingly positive reviews from the gaming media and sold over eight million copies worldwide. Many of the industry's journalists have praised it as one of the most important first-person shooters of all time. The game's influence on newer games of the genre signalled a transition from the old Doom-like approach to a more realistic and atmospheric style. GoldenEye 007 was followed by a spiritual successor, Perfect Dark, also developed by Rare for the Nintendo 64. In 2010, a reimagining of the game was published by Activision and released for the Wii and Nintendo DS, then later re-released as GoldenEye 007: Reloaded for the Xbox 360 and PlayStation 3 the following year.