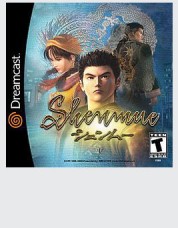 Shenmue takes place within Yokosuka, Japan. The four main areas of Yokosuka available to the player are detailed and offer many avenues for exploration. The Hazuki Dojo is located in a small hamlet called Yamanose, where many of Ryo's childhood friends and neighbors live. Ryo's childhood friends, Ichiro Sakurada and Noriko Nakamura, are also residents of Yamanose. Directly next to Yamanose lies Sakuragaoka, a slightly bigger neighborhood. There are several points of interest here, including Setsu Abe's Candy Shop and Sakuragaoka Park. There are also several residents of Sakuragaoka that can offer assistance to Ryo in his quest to find Lan Di. They include local gossips Fusayo Mishima and Fusako Kondo, as well as Naoyuki Ito, who lends Ryo his motorbike towards the end of the game.

Dobuita, the second largest location in the game, is a busy town that boasts a wide variety of people and activities. Dobuita offerings include an eclectic and diverse selection of shops in the game, from convenience stores to specialized antique shops where valuable martial arts scrolls can be purchased. Nozomi is often found in Dobuita at her grandmother's flower shop. There is also a red light district with several bars, restaurants, a small slot machine parlor, and a mahjong parlor. The bus service that allows Ryo to travel to Yokosuka Harbor is also located here near a tobacco shop. Yokosuka Harbor is Shenmue's largest environment. Ryo first travels there to meet Master Chen, and eventually gets a job at the harbor to gain information on The Mad Angels, who have a large criminal influence in the area. Mark Kimberley, who eventually becomes a valuable friend to Ryo, also works at the harbor and has several run-ins with the Mad Angels. Shozo Mizuki, a homeless man who lives at the harbor, is a skilled martial artist who reveres the Hazuki style and teaches Ryo three useful techniques.

The story of Shenmue begins on November 29, 1986, in the perspective of the protagonist Ryo Hazuki (芭月 涼 Hazuki Ryō) returning home to his family dojo to witness his father, Iwao Hazuki, battling with a tall, ominous man dressed in a green silk Kung-Fu suit known as Lan Di. He demands Iwao hand over an item known as the "Dragon Mirror", though Iwao refuses to reveal where it is. Ryo intervenes in battle after his father is felled, but is injured by a blow from Lan Di. He then lifts Ryo from the ground and threatens to kill him with a final blow, which prompts Iwao to reveal its location underneath the cherry blossom tree.

After Lan Di's henchmen recover the mirror, he mentions a man called Sunming Zhao, who was allegedly killed by Iwao in a rural Chinese village. The two then engage in combat for the last time, as he wishes Iwao to die "as a warrior". Lan Di finishes the fight with a deadly blow, and he and his party then leave. Iwao dies shortly after in Ryo's arms, which fills Ryo with the desire for revenge above all else. He begins to instigate inquiries into the incident with the local people of his hometown, Sakuragaoka.
Shenmue plot introduction (Gameplay starts on 29 November 1986)

Ryo's first clue is a car that some of his neighbors saw on the day of the murder. Though his leads are few and far between, Ryo slowly makes progress in his investigation by interviewing people all over Yokosuka. Just as he is about to run out of leads, a letter from a man named Yuanda Zhu suggests that he seek the aid of a certain Master Chen, who works at the harbor. Through Chen and his son Guizhang, Ryo learns that a local wharf gang known as the Mad Angels is connected to Lan Di's crime organization, the Chiyoumen. Ryo also learns that "the mirror" stolen by Lan Di is part of a set of two mirrors. After much investigation, he locates the second mirror underneath his father's dojo, dubbed the Phoenix Mirror and decorated with a phoenix.

Ryo takes a job on the waterfront in order to learn more about the Mad Angels gang, and eventually he causes them enough trouble that the gang kidnaps his friend (and principal love interest) Nozomi Harasaki. To rescue Nozomi, Ryo must first fight Guizhang, then team up with Guizhang to defeat all seventy members of the Mad Angels gang. Upon defeat, the gang's leader reveals to Ryo that Lan Di has left Japan for Hong Kong. With the aid of the Chen family as well as his family and friends, Ryo boards a boat to Hong Kong. Before the close of the first chapter (and subsequent end of the game itself), he is instructed by Master Chen to seek out the help of a master of the Chinese martial arts located in Wan Chai named Lishao Tao. Concluding the first chapter of Shenmue, Ryo boards a boat and travels to Hong Kong in pursuit of Lan Di.