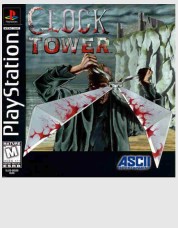 Clock Tower is a 2D point-and-click style game, where the player controls a cursor to direct the main character, Jennifer Simpson, and give commands such as investigating objects or opening doors. The interface is akin to 1990-era computer adventure games, but simplified to work better with a gamepad. Primarily, the player can only move Jennifer left and right through the environment, although there are some rooms in which an action requires Jennifer to step into the background.

Clock Tower is unique to other adventure games of the era in that it features a stalker pursuing the main character; this delays puzzle solving and requires the player to run in order to find objects or hiding places to fend off or avoid the attacker. The stalker is a slasher villain, named Bobby, who wields a large pair of scissors. If directly confronted by Bobby, the player engages in a "panic" phase and must repeatedly pound the "panic button" to struggle with the attacker. If Jennifer is low on health, or the player does not tap the panic button fast enough, Bobby will attack Jennifer and the player will be presented with a game over screen.

Although the game refers to it as Jennifer's health, the color of the background where her face is shown changes to represent her current fear level. Blue means she is in a calm state, while yellow means she is startled, orange meaning she is alarmed, and finally red, where she will begin to panic. In red, she is more likely to be attacked during a direct confrontation with Bobby. Additionally, while running away from Bobby, there is a chance Jennifer might trip over her feet, making her vulnerable if Bobby is close by.

Many of Bobby’s appearances are triggered by the player inspecting certain objects, but there are some cases in which he will come out of a hiding place and chase Jennifer as soon as she enters a room.