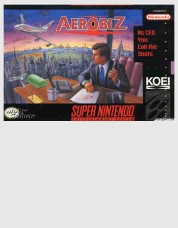 As CEO of a budding international airline, the player has a limited amount of time to expand their business to become the industry leader against three other airlines (either AI-controlled or human opponents). The player has an amount of control over how their airline develops, such as the name, investments, what routes to fly, plane purchases, and other various aspects, while at the mercy of world events such as politics (for instance, if the player runs his or her airline out of Moscow, he or she can initially only buy Soviet planes and will have a harder time negotiating with Western nations) and natural disasters. The player can also get the company involved in peripheral businesses such as hotels and shuttle services.

The sequel Aerobiz Supersonic was released in August 1994 for the SNES and Mega Drive/Genesis. The player is presented with a wider variety of options in nearly everything, but the game play is much the same. Another sequel known as Air Management '96 was released only in Japan for the Sega Saturn and PlayStation.