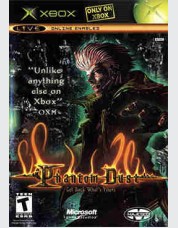 Phantom Dust  is a video game for the Xbox console. It was developed by Microsoft Game Studios, produced and directed by Yukio Futatsugi, director of the critically acclaimed Panzer Dragoon for Sega Saturn. It was licensed for release in the U.S. by Majesco. Phantom Dust is a pseudo-card-based action/strategy game in which the player collects skills (over 300 total) and takes missions to attempt to discover why Earth is in the condition it is. Players construct "arsenals" similar to decks of cards and then use them to do battle against other players. The game incorporates strategy and action elements in to a game that requires both mental and reflexive skill
The game supports Xbox Live. It debuted with a budget retail price of $19.99 and remains a cult hit.
As of April 2007, Phantom Dust is backwards-compatible with the Xbox 360.
The Xbox servers no longer support Phantom Dust Online Multiplayer, or any other Xbox Original game.